Eselfontein MTB Festival
(14-16 October 2016)
Friday afternoon, Kevin and Johann packed their bags, tents and mountain bikes and headed for Eselfontein, just outside Ceres for 3 days of fun. This event has an interesting format including a Friday night race starting at 6pm, meaning that you need to pack in those bike lights and be able to handle yourself on some technical single track in the dark. This also allows you to get some work done on Friday morning before leaving the office so you don’t have to put in a full days leave. It does, however, mean that your recovery time for Saturday’s race is pretty short, but we liked this format and think it should be used more often in MTB stage races as it adds a new dimension with some night riding. 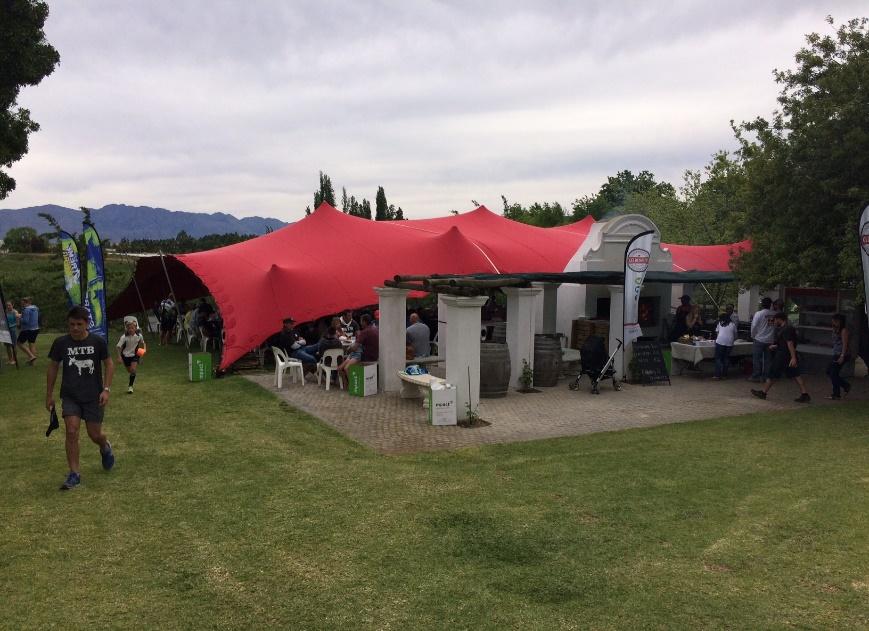 Arriving at Eselfontein, the car’s temperature gauge showed 32 degrees. Luckily this had dropped considerably by the start at 6pm. Off we went, a bunch start with the entire field starting together. This stage would be a seeding run to get into the various start batches for Saturday, so the racing snakes went out hard to get into good position. After the first climb, the field had split up a bit and we entered the first single track section. After many months of focusing on road cycling only and with no MTB riding leading up to the race, Kevin was all over the show on the single tracks, looking like a real rookie for a while. Thank goodness half of it was in the dark. (Luckily by day 2, the confidence started coming back and there was plenty fun to be had on the technical single track that is on offer at Eselfontein.)
Half way through the stage on day 1, just before we had to turn the lights on, a group of us took a wrong turn and lost about 2mins, including a few positions. Thereafter, we entered a long section of single track with no real passing opportunities, so we just sat back and enjoyed the ride, flowing through the bush and forest sections in the dark. All you could see for miles was a snaking line of bicycle lights. It was awesome. Team Pure Savage finished in 2 hours 16mins.
After a nice warm shower, we lit a fire, braai’d some steak and wors and enjoyed a few cold ones. Getting ready for bed, Kevin realized that he had forgotten his pillow and sleeping bag. Not fun! Brrr…. 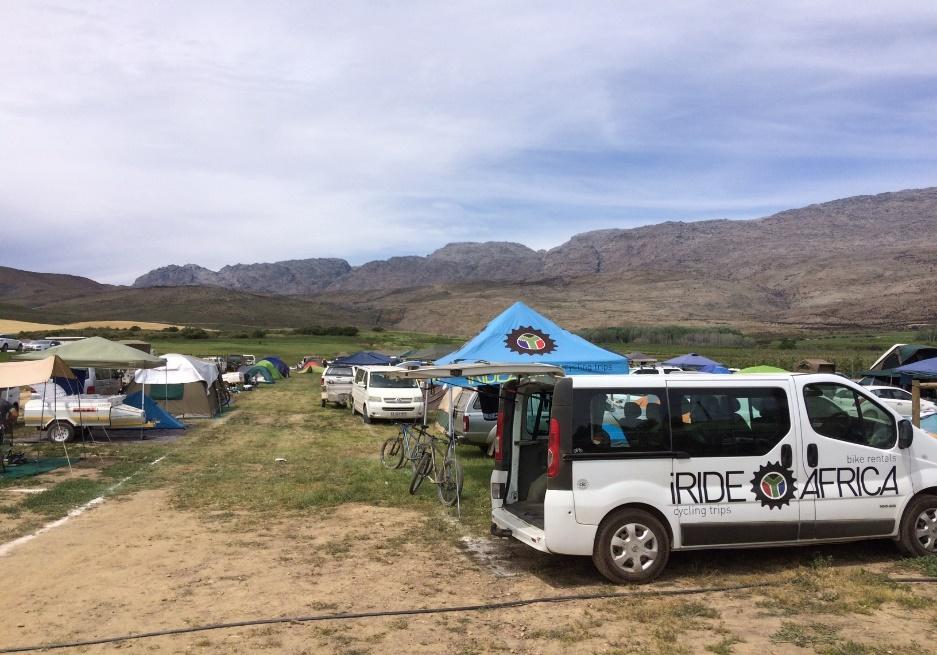 We woke up on Saturday morning to some beautiful weather, with somewhat tired legs, but keen for the challenge that lay ahead. We managed to sneak into A batch for stage 2. With 900m of climbing in the first 32km, the going was tough, but we had a few single track sections in between to keep us interested. After summiting the big climb of the day, we were met by some friendly faces and helpful hands at the hill top water point. We topped up our bottles and applied a quick splash of chain lube before heading off down the mountain. The descent was exhilarating with some tight rocky switchbacks, a few daunting drop offs and some sandy patches which collectively required full concentration all the way down to avoid any mishaps. A loop or two around the local dams and across the finish line in 3 hours 31mins for Team Pure Savage. 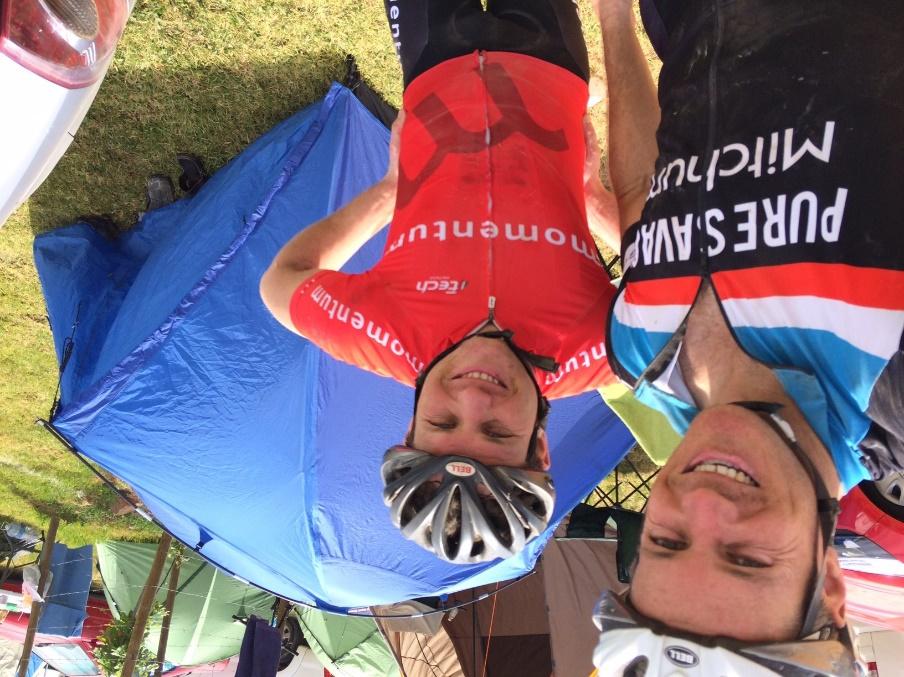 Then into the usual post-ride routine, chocolate Sterrie Stumpie, shower, chill, beers, a braai for lunch and another braai for supper. Perfect! One of the great things about this event is that the organizers leave it up to the participants to decide on their level of comfort, accommodation and catering. You can camp and supply your own food, for a budget weekend, camp and buy food at the various food tents for a mid-range weekend or treat yourself and book into a B&B in Ceres which is only 12km away from the venue. Personally, we enjoyed the vibe of the camp site and the conversations around the camp fire in the evenings, sharing our stories and experiences on the day’s riding, along with a bit of the usual banter. We even managed to steal some free advice from skills coach Joanna Dobinson. 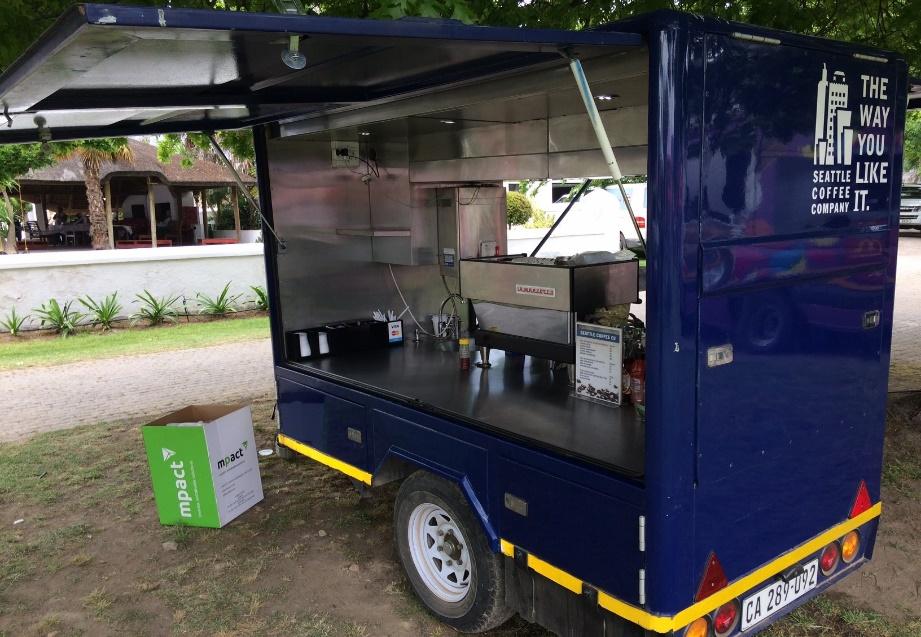 Sunday morning greeted us with overcast conditions and we decided to pack up our campsite before the race started, just in case the heavens opened, which thankfully they never did. The legs were definitely a bit weary after stage 2, but nothing that a good Seattle coffee and a little bacon and egg roll in the morning can’t cure. Stage 3 was a little shorter and a little bit less climbing than the previous day, but by no means an easy day on the bike.

The bulk of the climbing was to be conquered in the first 15km on district road and jeep track, with a particularly difficult section of 18% gradient for a few hundred meters. The middle section of the stage produced some very interesting landscape – super rocky, a bit sandy and black burnt vegetation after a recent fire had hit the area. You were forced to maintain 100% focus through this section to a) avoid taking a tumble over those sneaky boulders that seem to pop up out of nowhere along the path and b) making sure that you are still going in the right direction, looking for every little orange sticker to confirm your whereabouts. After this section, there was some fast flowing single track all the way down to the Eselfontein entrance and then the last bit of awesome single track along the river which we had done on stage 1 as well and over the finish line in 2 hours 43mins.
Kevin and Johann managed 8th place overall for Team Pure Savage.
All in all, a thoroughly enjoyable weekend. A stage race with proper mountain biking, where the route is definitely king. It is unlike any other race we’ve done. The 3 days each had their own character and challenges, but constantly kept a smile on our faces, even though the bodies were taking strain. We highly recommend this event. You can even head out to Eselfontein for a weekend away and in your own time, ride their trails which are open all year round. (Just make sure your fitness and technical skills are up to scratch).

Thanks to Eselfontein for the awesome venue and trails, the race organizers for putting on a top notch event, fantastic water points and race village, Entry Ninja for their timing system, Seattle Coffee, Ceres Cycles and the food suppliers and friendly staff that ran the food stalls all weekend. Bravo! 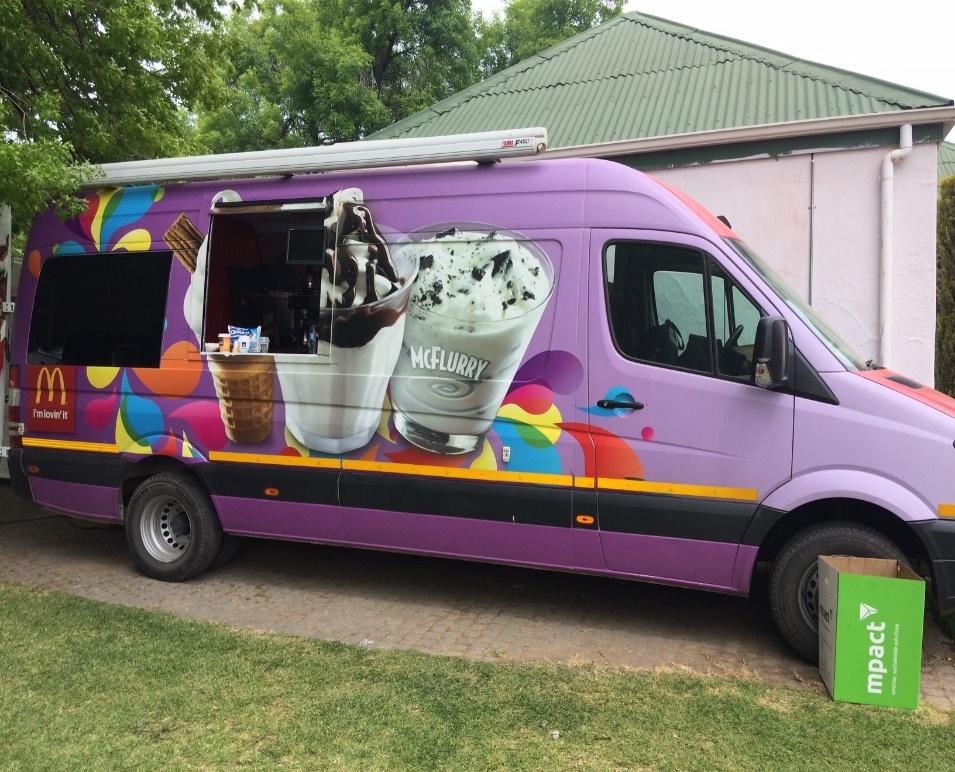